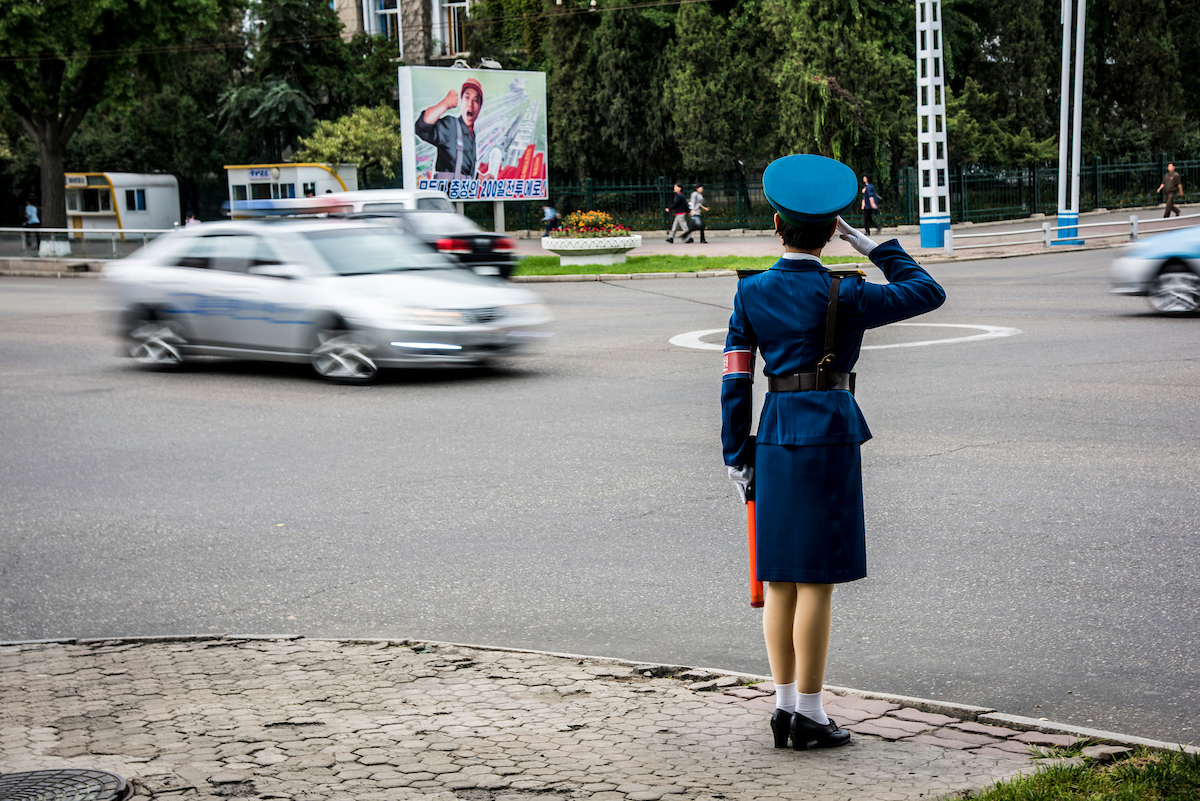 A Photographer in North Korea

I am standing in the queue, passport in hand waiting to head through immigration. It is a ritual I have been through many times before but this time I feel somewhat nervous. I hand over my passport, slightly sweating now, and try to act calm as I look the officer in the eye. He stamps the visa page and I head to customs. I hand over my phone and they check the contents of my bag, which is full of my photographic equipment. After a rudimentary check, looking at my storage cards and phone, I am through. I have been allowed to in to the Democratic People’s Republic of Korea (DPRK), or North Korea as the rest of the world know it.

I was here to lead a world-first trekking expedition to the country for Secret Compass who run exploratory, challenging and adventurous trips to some of the less well known and least visited destinations around the globe such as Afghanistan, Iraq, DRC and Iran. I had met a well-known photographer for Vanity Fair, in Nepal on a press trip, who had visited North Korea many times and published a book on the country. He not only encouraged me to run a trip there, but was beaming with such enthusiasm for the country that I was eager to see what was on offer there for myself.

With all the team through, we were met by our guides and chaperoned on to a bus. They didn’t tell us much at this stage, but we were to refrain from taking pictures of locals harvesting rice. Although not that strictly enforced, it later transpired that they did not want these images getting out as they might be portrayed to enforce a perception of poverty in the country. Although there are far more wealthy ‘democratic’ countries that still harvest their rice by hand, I can see how images in the wrong hand can be misconstrued to alter the perception of a country.

I have travelled and worked in many countries, and a lot in hostile and challenging environments. I felt slightly nervous, as did most of the group, who were all very well-travelled, due to the negative perception that is placed in the media about the country. We only really hear about propaganda pushed out by the West, or indeed by the propaganda and limited media pushed out by North Korea itself. Very little is known about the ‘real’ country. Hopefully, all would be revealed to me..

We had our full brief from our local guides once we arrived into the capital city, Pyongyang, in a micro-brewery. The North Korean’s love their beer and even hosted their first international beer festival not long before we had visited. The rules were pretty simple, mostly that we had to be accompanied and to be respectful to any images, murals or statues of the Great Leaders, of which there were many. Our guides spoke fantastic English, mostly learnt from previous travellers. They had a sarcasm and wit which was not expected. Most would argue they are ‘government minders’, but on any tour or holiday you are led by a local guide and this was no different. The tour company have been operating for decades from the start of taking tourists into North Korea. Every company is state owned, and by virtue the guides work for the government. We never felt restricted by them, and there was so much to see that, without them you would not have time to see everything by yourself.

We spent the next two weeks exploring the country. The trekking was incredible with stunning vistas and breath-taking scenery, set amongst vivid autumnal trees. We explored several destinations to hike in, all different from each other, including one set within the DMZ itself. We explored the city, the DMZ and fascinating sites such as the International Friendship Museum, which includes every gift to the Great Leaders including a bullet proof car from Stalin, or a train carriage from Chairman Mao, all set deep in a bunker under a mountain.

Everywhere you looked there were subjects to photograph. Common sense dictated whether it was ‘right’ to photograph something, and we were only caught out once when we captured a cable running through a foreground of a mosaic to the Great Leaders, as it obscured their faces. Most locals went about their normal business, but those we met either on the walking trails or in the service industry, were charming, polite and fascinated to meet us although mostly shy due to their lack of English. Most were happy to be photographed as long as permission was sought. A particular lady stood out, where I took an image of her standing in the doorway of a shop she worked at. She was dressed in colourful traditional dress and had beautiful features. She looked away after I took a picture of her looking at me, and I took another picture which seemed to sum up the beauty and the colour of the country, but also of being quiet and shy and having to look away from what is happening to them as a nation.

When most people ask me what my favourite country I have visited is, I struggle to respond due to each destination evoking different memories and feelings. After visiting North Korea though, I usually respond with saying that this is one of the best countries I have travelled to. When you walk into a situation where you have no expectations apart from negative images, it is not hard to be won over by what actually is the situation on the ground. The country has incredible potential, which will open up as the years go on, allowing for more exploring of a stunning mountainous region.

We were challenged with the trekking, but were rewarded with amazing views. We were fed incredibly well with such a variety of different cuisines, and the people were lovely. My memory cards were brimming with images by the end of the journey, and hopefully go some-way to telling the other side of the story. Hopefully it will entice more people to visit, which can only be a good thing, so that people can make their own mind about this fascinating country and people.