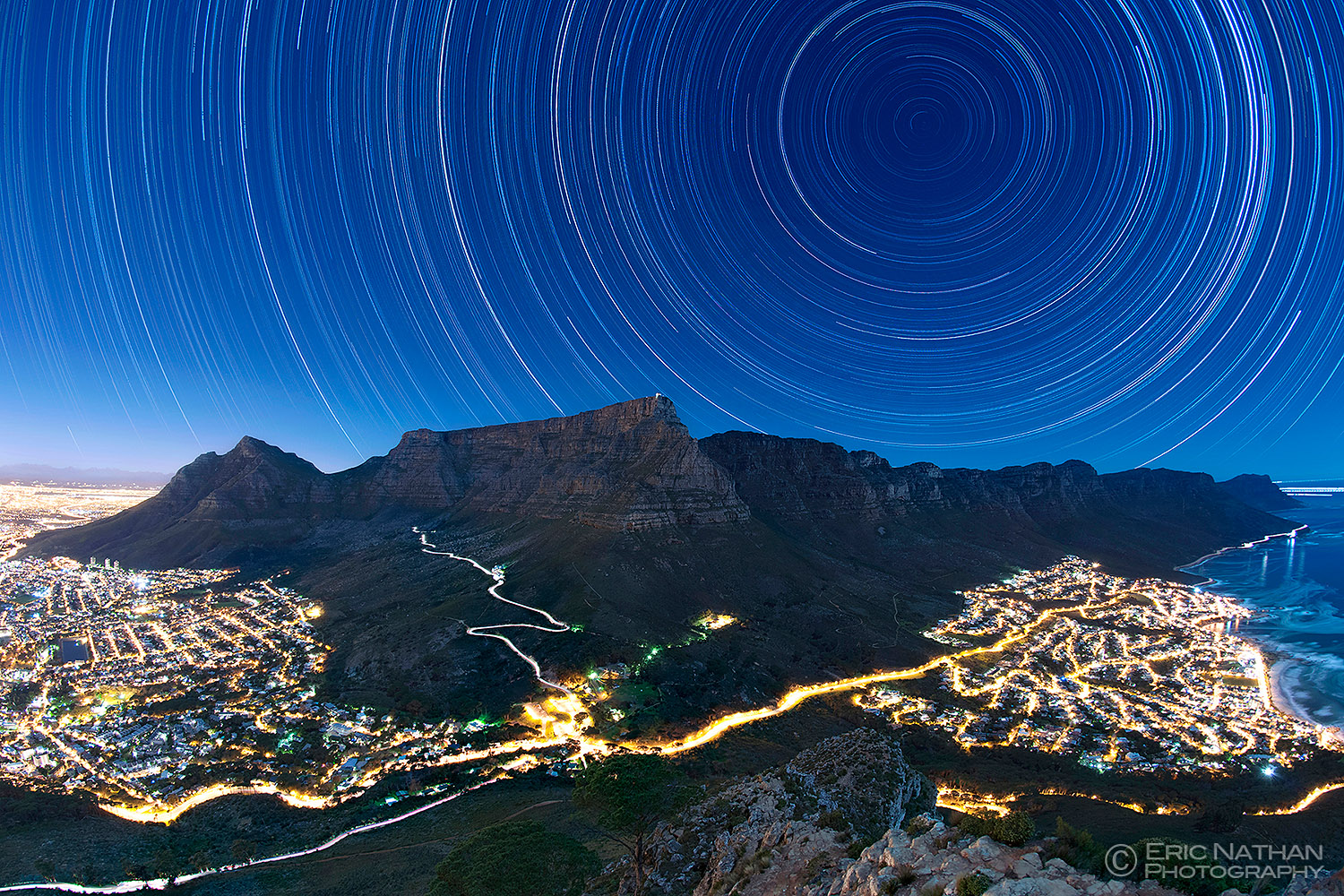 What makes a winning shot?

Long-standing Loop photographer Eric Nathan recently scooped top honours at the 6th International Earth & Sky Photo Contest. He tells the story behind this breathtaking image, shot in his homeland of South Africa, and chosen from images in 54 other countries.

How long did it take you to set up the shot?

It took about an hour and a half to climb up Lion’s Head, set up all my gear, set the camera to take photos continuously on an automated interval-timer setting and make myself comfortable for the long, cold winter night ahead (it was mid-June).

Did you know you had a winning shot when you took it?

I had tried to capture this shot a couple of times before, but those attempts were thwarted by clouds forming in the middle of the night. This time the sky remained totally clear throughout, so I knew the result would be very much what I had envisaged.

What were the technical considerations?

A shot like this is only possible if done on the night of a full moon (at most one night before or after), as it is the moonlight which illuminates the landscape. Any cloud at any point during the night will dilute or mask the star trails, so a totally clear sky is essential. You also need a weighted tripod to ensure the camera remains totally immovable throughout the duration of the shoot.

It is only possible to capture circular star trails if the camera is pointed more or less due south (in the southern hemisphere). This is because there is an imaginary point in the southern sky called the south celestial pole around which the Earth appears to rotate, and this is the point around which the star trails form their concentric rings. Fortunately for me, the south celestial pole happens to be above Table Mountain when viewed from Lion’s Head.

The image is a montage of more than 900 30-second exposures, which requires more power that the camera’s regular battery can supply. So I modified my camera to run off an external 12V lead-acid battery to be able to run the camera continuously all night long. And, as it turned out, half of the next day too. I had the dual intention of creating both a star trails image and a matching time-lapse video of the whole night. But then the next day dawned so clear and bright that I decided to continue shooting the sequence right through to 1pm (a total of over 15 hours) to capture a much more impressive and lengthy time-lapse sequence.

What camera / lens / lighting did you use?

I used a Nikon D3X camera, a Nikon 16mm fish-eye lens and the images were captured in RAW format using an exposure of 30 seconds at f5.6 and ISO 400. I then post-processed all the raw files using Adobe Camera Raw, ran all the resulting images through StarStax software to derive the star trails, and did some further final adjustments in Photoshop.

I started dabbling in photography in high school, but only began pursuing it seriously when I was in my late 20s.

Any advice for aspiring photographers?

There’s no substitute for experience – the best way to learn is to get out there and take photos.

Your favourite subject to photograph?


Error: Access Token for loopimages is not valid or has expired. Feed will not update.